Book Review of Stories from the World of Tomorrow: The Way the Future Was! 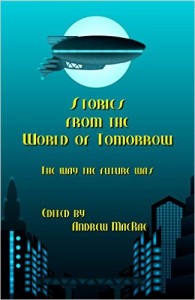 Here’s a review I started several eons ago before my life was derailed by summer holidays, or vacation, as my American children insist.

I love reading anthologies precisely because it is difficult to sustain attention at busy times so a quick few pages here and another story there soon add up to a whole book. And what a delightful collection it is, something for everyone, catering to both the hard-core nerd, [which is not an insult] and the soft-skinned escapist. [Which probably is an insult.]

As before, I want to avoid spoilers, so instead I chose a favorite quote from each, which was tough because there were far too many to choose from. My Kindle looks like a stripy tiger with all those highlighted lines.

Artificial Girls on the Illuminated Highway by Amanda Bergloff

“The women promised physical delights, while the male proclaimed his ego.”

A Deep Breath of Tomorrow by Raymond K. Rugg

Father looked skeptical. “Yes, yes, your robot is an electronic marvel, Bert. But being able to differentiate between red and green, and being able to smoke a cigarette, these things hardly qualify your automaton to be a fit companion for a small child.”

The King’s Contest by Wenda Morrone

“Socially I was a pariah. There were the military protocols and in addition, no one wanted to incur Witty’s wrath. So I messed alone, watched the videos alone; it was shaping up as a very lonely trip.”

“Emmit’s great-uncle Wynford made an excellent example. The man had spent half of the memorial service stuffing miniature quiche down his trousers.”

“The truck loomed large outside the rows of neat bungalows, a hulking, metal-and-rivet behemoth amongst polite, sleek sedans.”

Master of the Underworld by Michael Chandos

“Robots, yes, I said I’d like some companionship, but not shipped in like spare parts. People are alive! Search your knowledge bases for the definition.”

Elektro The Westinghouse Moto-Man and I by William Stanforth

“We spend the evening playing charades. Elektro and I are on the same team and we fail miserably, which actually works out as Bill is a particularly sore loser and does not take defeat gracefully.”

One Step Forward by Matthew Pedersen

“ … what you’re doing right now is just one small piece of a horrifying puzzle! It’s no different than someone driving around in a parking lot for an extra fifteen minutes looking for a spot closer to a store, or someone microwaving a gross, chemical laden TV diner every day of the week rather than taking the half hour it takes to make a proper meal. You’re using technology to get out of the most minute amount of effort, rather than its intended purpose.”

Perfect Progeny by Bobbi A. Chukran

She walked off, shaking her head. “Your grandmother would have a conniption fit if she saw this,” she said, staring at the giant Tomato Man figure. She shivered. “And a perfect tomato? Who needs perfect? The taste is all that matters to me. Nothing good will come of growing vegetables like this. Trust me, son, this will never catch on.”

Meeting Across the River By Michael McAndrews Bailey

“Get to the point, tin can,” Dad said. “Based on today’s activities and caloric intake, Cecily could be allowed to have two burritos for supper tonight without violating standard caloric intakes.”

The Coil By Sebastien Mantle

“Just a few months before every major city on
earth sports its own big glowing bug zapper.”

There is No Way Like the American Way by Stephen Hill

“Square dead lawns surrounding square dead houses, all bound by square dead concrete paths both narrow and wide, spread out before them towards a thin line of charcoal that swallowed the rest of the horizon to the east and to the west.”

“Her thoughts and remembrances disappeared like morning dew, fresh with the promise of a new day, disappears before the rising sun.”

The Robot Who Smoked By Stephanie Cage

“Viv would be sure to egg her and Barrett on to start a family, but Barrett wasn’t keen – ‘expensive little beggars, kids, and so many things that you have to worry about’ – and besides, how did you start a family with someone you never saw except when they were eating or snoring?”

Welcome to the Greatest Show in the Universe By Deborah Walker

Zelda smiled. “The cards are unclear, as they always are, my dear. But I will say this to you: look underneath the surface of your problems. There are unseen layers in our universe.” “I’d hoped for something a little more specific, Zelda.”

Stories from the World of Tomorrow: The Way the Future Was! Darkhouse Books. Kindle Edition available from all good booksellers as well as Amazon.

Meanwhile, I’d welcome your recommendations for other recent or pending reads too?

An Anthology from Dark House Books edited by Andrew MacRae

While the world and his wife are away on vacation in August, I am stuck at home. However, that doesn’t mean I can’t whisk myself away on an imaginary tour of the best holiday destinations available with this well-seasoned collection of murders and mysteries.

I thoroughly enjoyed this weekend read and I hope you will too. Rather than post spoilers, instead I wanted to share a few of my favorite lines from each. This is no mean feat since the temptation to include a vital clue when spotted is almost irresistible, but here goes.

Arch Rivals by Jack Bates is set on Mackinac Island on Lake Huron:-

“New job, Vic? Jessie asked albeit flirtatiously even though Mirabelle wasn’t one for adverbs.”

“Erin seemed overeager again. Kip gave her a little headshake, frowning. Get on the same page, people, conspirators were supposed to conspire.”

“Not what I’d expected in Ireland,” I said.

Des inclined his head. “Ireland is quite cosmopolitan these days.”

“She’d been carrying her flip flops in her hand and now flung them down in the dirt near me. Of course, kinda hard to sneak in with flip flops beating out an announcement.”

Critical Mass by Vinnie Hansen hidden in plain sight of the Santa Cruz coast with more than a couple of witty one-liners.

“You can’t be May Knight,” Hedra pronounced with a dramatic flip of her hand. “Too monosyllabic. Audiences will mistake your name for an evening in May. Use Maybelline.”

“The cup and saucer Nasim placed in front of me was half the usual size and elegant—black with gold leaf trim. She poured ebony coffee that smelled of cardamom. A plate of dates, some flatbread, and a bowl of hummus sat the middle of the table.”

Pearls of Wisdom by Su Kopil, is set in Charleston, South Carolina

“She had more important things to do like watch the dandelions grow, keep the pile of books on her armchair from teetering over, and there was her dumb cat, Clover, who insisted on being hand fed one kibble at a time.”

Blood Lines by Dennis Palumbo whisks the reader away to the Bahamas, high on my wish list.

“She sat in the overstuffed chair, sunlight splintered into dusty streams by the thick blinds.”

Tis the Season by Caroline Taylor takes us to Carolina coast to a far chillier time of year.

“Sam would not make a very good detective. Oh, he’s all right as the town’s only year-round policeman, but his curiosity quotient is sorely deficient.”

Murder in the Middle of a Battlefield by Brenda Seabrooke happens over in Front Royal, Virginia.

“I didn’t notice the stillness of the room, the unexplained chill, the sudden air current that sucked the curtains into the closed windows and belled them out again.”

Unhappy Trails by John Hegenberger in the State of Ohio.

“That night, I dined alone on pinot grigio and frozen pizza, watched The Big Lombowski and took my headache off to bed.”

The Bride Wore Gold A New Orleans Wedding by Margaret S Hamilton says it all.

“There will be wedding cake,” one of the grandmothers said. “But first, we’re going to have some New Orleans bourbon bread pudding.” She smacked her lips with anticipation.”

Mess with the Bull, Get the Horn by Michael Terlecki’s story is situated in Las Vegas.

Wrestling with the Noontime Demon by Warren Bull in the Chihuahuan Desert, Mexico.

“You’re pretty ballsy for a little old man in a dress,” said Parker. “But I don’t believe in your God. So there.”

The Letter B by Bern Sy Moss transports the reader to Door County, Wisconsin.

“I was surprised. Grandpa Angelo made it clear he wasn’t pleased with my career choice. He constantly berated me with, ‘Nice girls aren’t detectives and detectives aren’t nice girls.”

Where are you going? By Herschel Cozine finds our final destination at

“During the off-season, the press started up again with speculations about the fate of Jeff Lisbon. Ther supermarket tabloids ran headlines that claimed all sorts of child things about him. ‘Lisbon captured by space aliens. Jeff Lisbon Found in Mental Home in Miami. And one of the most outrageous headlines: Jeff Lisbon has sex change operation in Brazil.’”

Looking back over this before posting, I notice a food theme emerging. That’s the trouble with reading a great book, we forget to eat, too engrossed in meaty stories. I feel this anthology would benefit from a map but there wasn’t one in my e-book download, besides, everyone has the Internet, right?

I would like to thank the authors for increasing my vocabulary with two new words: sniled and Bullsmotch.

But don’t feel too bad for me on my staycation, after all, if you have to be stuck somewhere, where better than sunny [36 degrees Celsius / 97 Fahrenheit ] California?

This book is also available from Amazon